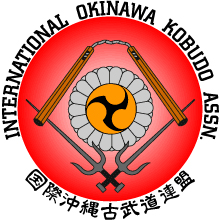 Kobu-do, the way of ancient weapons, is a martial way devoted to a method of combat using weapons. In a modern sense kobu-do is a combat art devoted to the preservation of ancient weapons. There is a Japanese and Okinawan version. Okinawa kobu-do weapons are generally thought to have evolved from or were developed from farm or common use implements. There is some evidence that the development of some of the Okinawa weapons were probably inspired by the Chinese weapons. An example of a common use farm implement is the kama (sickle) which was used to cut grass or rice. This tool is still used today. As in karate-do, Okinawa kobu-do is not about or focused on combat and learning how to hurt, maim or kill but is an ancient weapons preservation art and is a method for attaining self perfection.

Some Okinawa kobu-do associations such as the All Okinawa Kobu-Do Association, Okinawa Kobu-Do Kobu Kai and The International Okinawa Kobu-Do Association recognize and practice with twelve to thirteen weapons. Universally, most all organizations whether karate-do or purely Okinawa kobu-do recognize the roku shaku bo (six foot staff), the nunchaku (identical section flail), the sai (metal truncheon), the tunkua (baton with an attached handle) and sometimes the kama (sickle) are considered basic weapons. Within dedicated weapons organizations every aspect of training is observed. The study of the philosophy, history and culture associated with the weapons as well as the in depth study of kihon, kata and kumite.