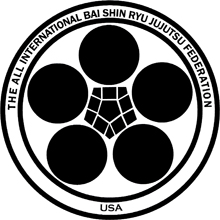 The term Ju-Jutsu was coined during the Tokugawa era (1615 – 1867) of Japanese history corresponding with the earliest part of the Ming Dynasty of China (1386 – 1644). Ju-Jutsu translates as the art of pliability. Ju 柔 literally  translates as soft, tender, mild or mellow. Some people mistakenly translate this to mean gentle. In reality Ju 柔 takes on more of an abstract meaning and is more apropos to the heart of pliability, flexibility or to give way. There is really nothing gentle about Ju-Jutsu at all. There is a strong indication that historically Ju-Jutsu came from or evolved from the Chinese system of Ch’in-na 檎拿 (seizing art) and probably went to Japan as an adjunct of Shuai Jiao (grappling art).